Motivation in esports – A review of current litterature 2021

Electronic games are a vastly growing industry, with multiple platforms and participants the world over. This also includes the competitive world, with esports growing rapidly every day. But even though this world is so influential, there is still a research gap compared to other sports fields. Numerous people worldwide engage in video games, but why are so many people motivated to do so? And what motivates the few, who choose to make this their professional lives? Motivation is our driving force and thereby a part of the meaning we find in our actions and decisions. Therefore, understanding the motivations of esports players would give a greater understanding of the underlining ambitions and urges driving them to top-performing and reach for greatness. Sports psychology has researched motivation for various fields of sports, but esports is still relatively new to being researched and therefore a subject lacking information, though still being a major area with many passionate players and spectators. Therefore, this review attempts to examine, which motivational factors affect gamers and esports players.

The following section will define and explain the methods used in this review.

In order to collect the data used, a systematic search was conducted on the databases PsycInfo, Scopus, and Google Scholar. The interest area was motivation and eSport and the search syntax was therefore based on these words and themes. The syntax can be seen in Table 1 below.

The choices of using the selected databases were made to gain a broad reach on the subject and the final search on all databases was performed on the 11th October 2021.

After the search was conducted, all the relevant articles were transferred to the website www.covidence.org, a site that organizes and stores articles for screening process use. The articles were thereby firstly checked for duplicates, whereby 5 articles were removed. For the screening process, two reviewers were chosen to independently go through the articles, which is also the recommended procedure (Higgins, 2019). This lowers the risk of bias and therefore gives the process higher reliability.

The 147 extracted articles were then screened based on the inclusion- and exclusion criteria seen in table 2 below.

The choice to exclude serious games and games created by the author was made to keep the focus on the field of interest, which was the motivation for gaming and esport, thereby the use of serious games and non-accessible games by the public, would not be able to add relevant information to this review. Furthermore, the demographic limitations were set in order to examine the average population within the field of interest.

These inclusion – and exclusion criteria were then used for both title and abstract screening and full-text screening – performed by both reviewers. 6 articles remained from the screening and were included in the results section. In the PRISMA flow diagram this process is elaborated – see figure 1. 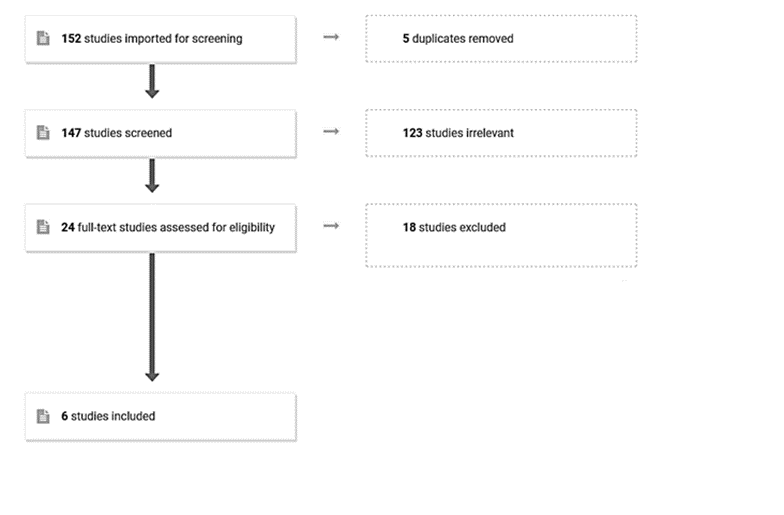 The table below shows an overview of the 6 included studies and their demographic, method and result.

In the study by Maria Frostling-Henningsson (2009) the participants in the interviews specifically mentioned communication as part of the social motivator, where they felt it added to connecting to people in ways different from the offline world (Frostling-Henningsson, 2009). They also stressed the significance of cooperating with teammates. The study additionally mentions the importance of exploring the worlds and storylines as a motivator driven by excitement and enjoyment. Lastly, the study found that multiple of the participants used gaming as a way of escaping the real world and gaining control.

In the study of Héctor Fuster et al. (2014) the motivators are clustered into two groups: Harmonious Passion (HP) and Obsessive Passion (OP), where each has subcategories: HP: exploration, socialization, and achievement. OP: socialization, achievement, and dissociation. OP is driven by urge, while HP is driven by interest and engagement. Participants were shown to score higher on HP (Fuster, Chamarro, Carbonell, & Vallerand, 2014).

The research by Samuel García-Lanzo & Andrés Chamarro (2018) mentions socialization, exploration, and competing, specifically winning, as some of the more overall motivations for the players (García-Lanzo & Chamarro, 2018).

In the article by Davinder Ghuman and M. Griffiths (2012), the achievement motivator differed in types of games – higher for FPS players, whereas the results from social motivators did not show any significant differences, where all three groups counted it as a motivator (Ghuman & Griffiths, 2012).

The study by Orhan Efe Ozenc (2020) differs between amateur players and esports players. Some of the motivational factors occurs in both groups, although the esports group also show to be motivated by competency development and bettering themselves as players, hereby also by what comes with being a pro athlete; fame (Ozenc, 2020).

The study by Yongjae Kim and Stephen D. Ross (2006) varies from some of the others with the motivational factors, especially with the factor of knowledge gaining. The study focuses on sports video games (SVG) and has found in their research, that players often have an overall interest in sports, which would explain the knowledge-focused motivation (Kim & Ross, 2006).

All the studies included mentioned socialization as a motivator, across different games and in both professional and casual settings.

The 6 included studies show an overall overlap in the motivational factors found, this being both casual, passionate, and professional players. The most common one, found in each of the studies, is the social component as a motivator. This points towards casual and professional gaming containing an excessive amount of socializing and it is a big motivation. The social part would include communication and teamwork in general, which can be found in all multiplayer games to some extent – giving the players the motivation to keep playing and interacting with others. In esport, this could mean the teammates mutually motivate each other to continue playing and improve – a motivator incorporated into the structure of the game.

Several of the studies also shared other motivators, although none as strong as the social motivator. Some of the reoccurring themes were enjoyment, exploration, escapism, and achievement. These themes also occurred both on a casual and professional level. Being motivated by escapism can, to some extent, be attached to enjoyment, since when escaping, one does it into something more enjoyable than what one tries to escape from, therefore the probability of escapism existing without enjoyment should be low, although this would have to be researched specifically for gaming in order to terminate any tendencies.

In regard to achievement, which includes a component of competition (internal as well as external), this appears to be an important motivator, especially for the esports- and passionate players. Based on the study by Orhan Efe Ozenc (2020), this motivator is not just externalized in winning tournaments and battles, but also internalized in the form of self-improvement and competing with oneself for bettering skillsets. This is an important motivator to have when pursuing a professional career in esport since it can help to push performance progress and make the chances of success much greater. This also points towards, that when you make a career out of playing, then you seem to gain multiple extra motivational factors, although still sharing some of the main motivators, that casual players have. Socialization and enjoyment still seem to play a big role as motivators, but on a professional level, then personal and specialized improvement in the field appears to have an effect. It thereby looks like the professional players don’t lose the motivation that casual players have, but on the other hand gain, more goal and achievement-oriented and motivators.  This can be a necessity when competing on a professional level, having additional motivators can help them keep to the more demanding gameplay and better their abilities. Whether this is a generalized tendency can however not be determined based on this review, since there are only included 6 studies on the subject. This calls for further research on the topic, both with more participants from different games, countries, and cultures – but also compared to female participation, of which there is a lack of in the included studies, which makes it difficult to give an all-rounded overview on the subject.

Although there are similarities in the included studies, there are still too few to make a conclusion on the subject – however, a hypothesis can be put forward regarding esport players having additional motivational factors than casual players, and these to a greater extent include internal factors.

The included studies in this review point towards a tendency, that when you start playing on a professional level and not just for fun, you also start being motivated by internal factors such as reaching personal goals, bettering skills, and achieving competencies. This seemingly separates the motivational factors between the casual and the professional player, while both groups appear to be motivated by enjoyment, socialization, exploration, and competition, socialization being the more universal one, esports players gain multiple additional internal motivators, that can help them keep to the more demanding gameplay and better their abilities. Because of the lack of studies performed on the topic, further research is needed to make conclusions.